Is there a connection between IBS and depression, anxiety and stress?

This really is the million dollar question and research is showing that there is, in fact, a link between IBS and psychiatric disorders including depression, anxiety and stress.

It causes abdominal pain, swelling or bloating of the abdomen, excess gas, mucous in stools, irregular bowel habits and alternating diarrhoea and constipation.

The symptoms of IBS are caused by a dysfunctional digestive system, therefore it is considered to be a functional disorder.

This dysfunction interrupts the normal movement of food through the GI tract, causing various symptoms, both physical and psychological.

The brain-gut axis is the line of communication that exists between the brain and the gastrointestinal tract. When there is a disturbance in the brain-gut axis, disruptions occur in the microbiome and the immune system.

IBS may be triggered by the immune system, which is aggravated by stress.

People with IBS may be more sensitive to emotional troubles and stress and anxiety may make the mind more aware of spasms in the colon.

The conclusion to this study was that dysfunction behind both disorders can be from the brain to the gut or from the gut to the brain.

The human microbiome consists of a diverse population of bacteria, both good and bad. If the balance of the bacteria is disrupted and there is an overgrowth of bad bacteria, the imbalance can have profound negative effects on both mental and physical health.

Altering gut bacteria by providing more good bacteria and suppressing the bad bacteria can be done with specific probiotics.

Specific Lactobacillus and Bifidobacterium strains, key ingredients in MiBiotix Mood, are now being referred to as “psychobiotics” for their potential therapeutic benefits.

Experimental evidence shows that these strains of probiotics positively influence cognitive functions, such as spatial memory and problem-solving abilities as well as having an influence on mood, anxiety and depression. They are key to replenishing the gut with good bacteria and restoring a healthy balance to the microbiota.

Probiotics also act on the brain through their anti-inflammatory actions. This inflammation can stem from the gut and the probiotics have their effects in the brain by lowering inflammation.

High levels of inflammation in the body and brain are known to be one of the major underlying causes of depression and other mood and cognitive disorders.

MiBiotix Mood enhances the gut-brain connection, boosting mood, decreasing anxiety and easing depression and alleviating the symptoms of IBSand is safe to take every day. 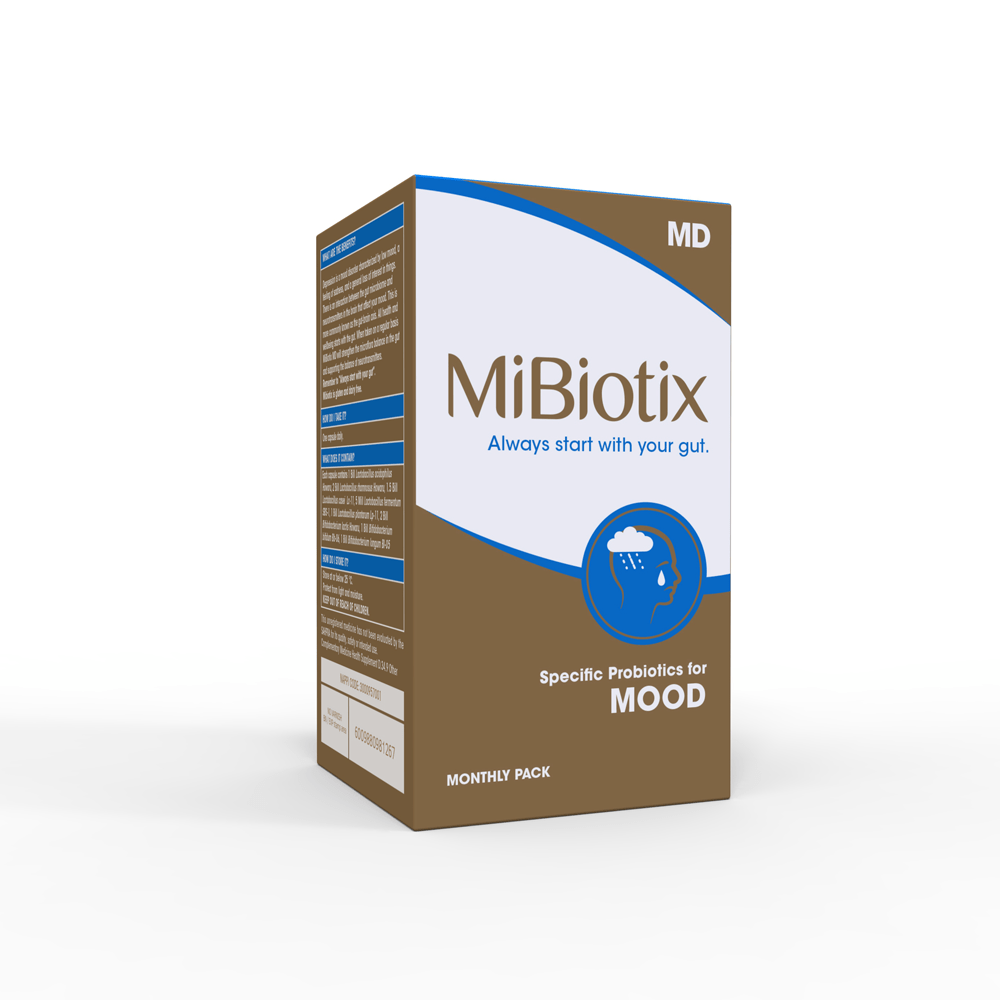