Is there a connection between my anxiety and my digestive problems?

Stress is generally caused by external pressures on us that we’re finding hard to cope with and the symptoms of stress usually disappear after the stressful situation is over. But stress is a common trigger for anxiety.

Anxiety, on the other hand, is a person’s specific reaction to stress; its origin is internal and focuses on worries or fears about things that could threaten us.

Symptoms of anxiety can include feeling nervous, fearful or restless, a rapid heart rate, hyperventilation, chest pressure, a sensation of choking, stomach pain or nausea, or excessive sweating, to name a few.

Anxiety can have significant negative effects increasing the risk of developing chronic physical conditions including impaired immune functions and problems with digestion.

Studies have shown that people who suffer from anxiety often also display symptoms of gastrointestinal disorders, such as bloating, diarrhoea and irritable bowel syndrome.

This is known as the gut-brain axis. A bidirectional communication system between the gastrointestinal tract and the brain. In other words, it’s a two-way street where the brain can affect the gut, and the gut can affect the brain.

A study in 2016 found that for around a third of people in the study, anxiety came before the gastrointestinal disorder, and for two-thirds, having a disorder like IBS came before anxiety or depression.

A healthy gut should have a diverse, stable and strong microbiome with high gut lining integrity.

If there is a disruption of the bacteria, maybe due to inflammation, intestinal permeability or lack of bacterial diversity, this can lead to disruptions in your mood and behavior which can lead to anxiety.

Specific Lactobacillus and Bifidobacterium strains, key ingredients in MiBiotix Stress ST, are now being referred to as “psychobiotics” for their potential therapeutic benefits, particularly showing improvements in anxiety and depression in human clinical trials.

Psychobiotics work on the brain-gut axis to produce health benefits for people suffering from anxiety, depression and other mental illnesses.

MiBiotix Stress ST maintains and replenishes your populations of beneficial bacteria impacted by anxiety and helps to reduce stress-related gastrointestinal complications such as abdominal pain. 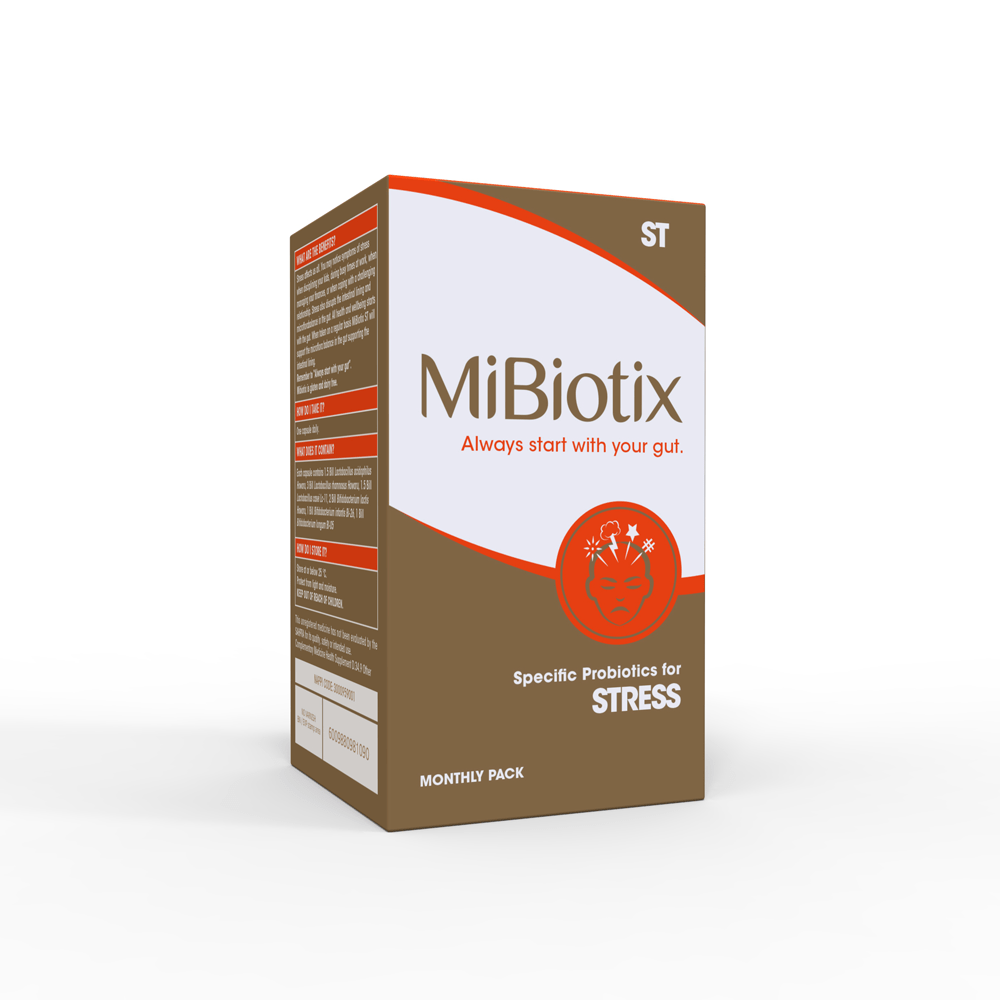